Currently, when a new record is added to the system or an existing record is updated, OpenEMPI will evaluate whether this record matches any other records in the system. This is a fairly expensive operation that needs to be performed against this record because it involves a number of steps that are listed below:

In order to increase the scalability of the system, it is imperative to allow for the evaluation of potential matches to be done asynchronously with respect to the incoming request that either created or updated the record in question. This will allow the original request to be processed quickly so that the response time experienced by the users is short and the evaluation of potential matches can be performed by the system as resources are available. The rest of this document describes how this feature will be incorporated into the current architecture of OpenEMPI.

The following figure illustrates the flow of how the synchronous/asynchronous option will be incorporated into the overall processing of add and update requests. Incoming requests to add or update a record enter the flow from the top of the figure. The add or update operation is processed first and the record is persisted in the system. If the system has been configured to process match evaluations synchronously, then the five steps described in the Background section of the document are processed within the same transaction and the original requests completes when all five steps have completed. This flow will be the same as the current flow of add and update requests through the system. 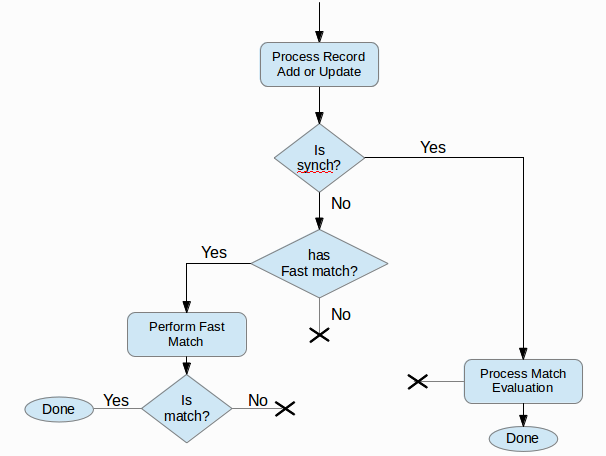 This tells the system to load the module during startup. The standard implementation of the shallow matching algorithm is configured in a similar way with the exact algorithm. You need to specify which attributes are used to assess whether there is a match between the dirty record and other records in the system. Unlike the deterministic algorithm though, there is no blocking involved. The current implementation of the shallow matching algorithm only compares the dirty record with other records in the system that have the same exact identifiers. To specify which attributes are used to establish a shallow match you need to add a section to the mpi-config.xml file listing those attributes along with the metrics and thresholds that will be used for each individual field. The following example should be able to get you started.

Don't forget to add the XML namespace definition at the top of the mpi-config.xml file.